The identification of high-energetic neutrinos from a distant blazar

The identification of high-energetic neutrinos from a distant blazar

A triumph of multi-messenger astronomy 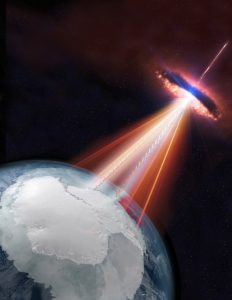 On September 22nd 2017, an energetic neutrino hit an atom of the gigantic cubic kilometer sized IceCube neutrino observatory in Antarctica. That atom, as a result, emitted a myon particle, which in turn resulted in a cascade of photons of visible light. These photons could traverse the extremely transparent water ice IceCube consists of, and were measured with the 5000 light sensors distributed all over IceCube. Data reduction pipelines subsequently determined the energy of 170922A, as the incoming neutrino was named: a stunning 290 Tera-electronvolt, which is 40 times the energies produced by the Large Hadron Collider. From the distribution of the emitted photons, the algorithm could also determine the approximate position in the sky where the neutrino must have come from, and within 43 seconds the algorithm sent an alert to observatories operating at different wavelengths all over the world, and in space. Close to the calculated position, there is the strong Blazar TXS0506+056, a supermassive black hole emitting a plasma jet blowing directly towards our line-of-sight. During the 170922A event, it turned out that TXS0506+56, which is at a distance of 3.8 billion light years, also had a maximum of gamma-ray activities. Data archives showed that also several other previously detected (“pretected”) IceCube neutrinos correlated with increased gamma activity of TXS0506+56, adding credibility to its identification as the emitter of high energetic neutrinos.

The identification of TXS0506+56 as the source of high energetic neutrinos is a triumph of multi-messenger astronomy. It shows the importance of data archives in different wavelengths, and it opens up new possibilities to study the energetic jets emitted from supermassive black holes.

Image: An artist’s view of the blazar TXS0506+056. A jet emitted from its supermassive central black hole emits neutrinos and electromagnetic radiation that have been detected by the IceCube neutrino observatory and observatories all over the world, and in space.