Results from the use of Effelsberg under RadioNet TA program.

Ultra-diffuse galaxies (UDGs) are notable for their extreme low surface brightness nature and extended radii; they have the stellar mass and appearance of dwarf spheroidal galaxies but the stellar radii of larger galaxies like the Milky Way. While UDGs were originally identified in the cluster environment, several theoretical models suggest that UDGs are a subset of the dwarf galaxy population and should also be found in isolation. Different models make predictions about both the total gas content and the underlying dark matter halo. 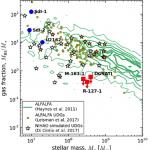 In order to test these models, the team of E. Papastergis, E. A. K. Adams and A. J. Romanowsky observed four isolated UDGs with the Effelsberg 100-m telescope to place limits on the HI mass of these galaxies under the RadioNet Transnational Access program (Project 111-16). One of these galaxies has a clear HI detection and is compatible with a formation model based on feedback-driven outflows. However, the other three galaxies were non-detections and have gas fractions much lower than typical isolated galaxies with the same stellar mass. Given the isolated nature of these galaxies, this is puzzling and suggests a different formation mechanism.